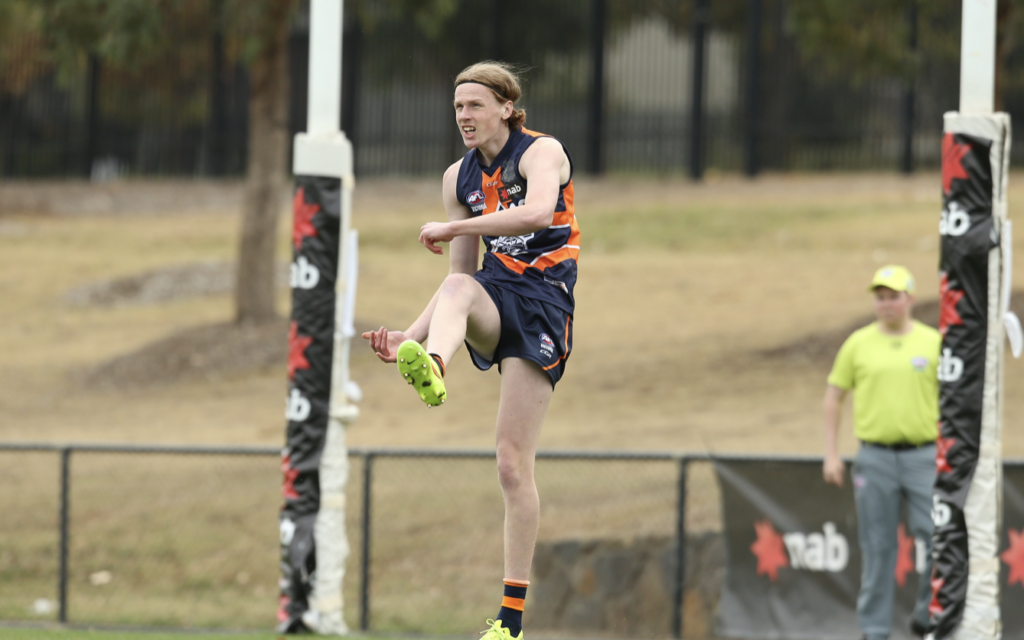 The Calder Cannons have retained the Shane Sexton McDonald’s Cup after a hard-fought 22-point win over the Western Jets in Round 12 of the NAB League season.

It was a scrappy affair at Highgate Recreation Reserve as no side registered a goal until the second term, with Calder holding on for a retentive 6.7 (43) to 2.9 (21) triumph.

Despite the inaccuracy which plagued both teams, the home side booted five goals straight in the second half to run away with their sixth win of the season coming off a two-week break.

The ‘futures’ fixture required clubs to select at least 11 players who are currently in their 16th or 17th year, with team line-ups allowed to consist of up to 24 players.

The Cannons fielded 13 bottom-age players who all showed signs of things to come.

Sam Ramsay (31 disposals and eight tackles) was a clear standout through the middle of the ground, while fellow top-agers Curtis Brown (29 disposals) and stand-in captain Harrison Minton-Connell (27) were also prolific.

Giacomo Thomas, Ben Overman, Cody Brand and Josh Hotchkin were the others to be named in the best players.

The Cannons also fielded brothers Ned and Flynn Gentile – the latter one of four debutants to take the field in the rivalry clash.

The first quarter proved to be an eyesore with both sides registering a total of just seven behinds in gusty conditions.

It took until the 19-minute mark of the second term before a goal was registered, with debutant Sam Paea snapping truly from the boundary line to break the deadlock.

Calder’s nine-point half time advantage was short-lived as the Jets found a reply through Eddie Ford early in the third term.

And as it seemed the Cannons would be counting the cost of their missed opportunities early, back-to-back majors to Nathan Stewart and Mason Fletcher meant the margin was back out to 11 points at the final break.

Saad El-Hawli’s goal in just over a minute into the final stanza drew the Jets to within five points of the lead.

But the hungry Cannons – in a show of resilience – never backed down or dropped their heads.

The Cannons flexed their muscles in the final stages of the contest with both Jackson Cardillo and Fletcher again capitalising on goal-scoring opportunities.

But the final major to 16-year-old Flynn Gentile – a classy finish on his opposite side – meant it was the sweetest of endings for a young Cannons outfit.

Calder will look to carry the momentum into this Saturday’s contest against the Dandenong Stingrays at Highgate Recreation Reserve.